The scent of Popeye’s fried chicken fills the air on board the plane on my way to Baltimore to fulfill the ticket that started it all: a one-way ticket from Baltimore to Reykjavik for only $178. I’m wondering if I can barter some homemade shortbread cookies for a piece of that chicken.

The first leg of my trip began in Las Vegas, where I intended to highlight attractions outside of the strip like the Valley of Fire, but a phone call on my drive from California to Vegas changed it all. Heck, it almost changed this entire trip. My cousin called telling me my aunt passed away. Growing up in Hawai’i, everyone made us all so close.

Now There I was starting the very beginning of my trip, driving theough the desert to get my car to Vegas to spend the summer with my aunts while I traveled abroad. Now I was in the midst of the loss of a loved one, a woman who was strong and always made everyone laugh.

I struggled feeling like I needed to head back home to Hawai’i with everyone, but knowing the last conversation I had with my aunty was her saying how proud and happy she was for me to be going on this trip I was torn. In the end I decided that what would make me and my aunt happiest would be if I continued on because now my aunt could join me.

She said she wished she would’ve traveled more so I figured I could take her with me. There’s an empty seat to my right and I just imagine her next to me, smiling.

Life takes everyone on different routes. Sometimes life gets taken too soon. For the first time in my life in January, I thought I was going to die. I hiked Mount Baldy and ended up holding on for my life trying to climb a mountain we saw to be our only way out after getting lost in unexpected climates.

A few months later I managed to somehow save a friend’s life by accidentally dropping a box on her at work. I felt horrible. She went to the hospital just to be safe as advised by out district manager and as it turns out, she was anemic and had a red blood cell count so low that the doctors and nurses were in shock that she was standing there before their eyes.

We as people take life for granted as if there’s always a tomorrow, but what if tomorrow never comes? If you died now, would you be satisfied by your accomplishments? Have you lived a fulfilling life?

These photos are from Mount Baldy. For a while it was hard for me to go through them after spending 12 hours trapped within the mountain and dancing with the Grim Reaper, but now it’s a nice reminder that I am in control of my life. I’m pretty sure I got up the mountainside solely based on will power. I could have let go and that was the scariest thought, that I was in control. My buddy Christian wrote a song about the experience that sums it up perfectly- Up Is The Only Way Down 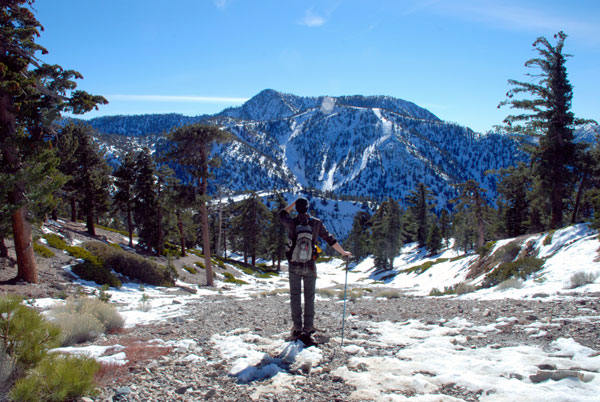