When people go to Belgium, they go to Brussels or perhaps Bruge, but there I was on a train to Liège. Who goes this city while backpacking Europe? This girl.

You’re probably wondering why Liège was even on my itinerary? I’ve got three reasons: waffles, frites and beer. And that’s exactly what I got.

I had left Paris; I knew I couldn’t stay any longer and caught a rideshare (via Bla Bla Car) as north as I could, which brought me to Metz. The driver and the other passenger were both limited in English and my French, almost nonexistent, made it fun trying to converse on the three-hour ride. I was making my way to Luxembourg City to spend the day, but plans changed and my best bet was to hop on the next train to Liège after only roaming the city for a few hours.

As soon as I could, I acquired the famous Liège waffles. Amongst old structures, just a stone’s throw from my friend’s home, was a plethora of waffles– some plain and some filled with rhubarb and other flavors that make your mouth water. I had been waiting for the day to get to Liège and try these waffles in its birthplace ever since I discovered Waffles de Liège. Do make note that there is are two styles of the Liège waffle when in Liège– the local version and the tourist version. I personally do not discriminate against waffles so I’ll take whatever I can get, but I did appreciate the waffle full of rhubarb jam (napkins needed).

Liège is a small city, making it a very walkable city. I easily walked from waffles to beer to frites to waffles to beer again in no time. I even ventured into some greenery with a view that overlooked the city, then was greeted with what I think is probably the longest stairway I have ever seen. Luckily, my friend created a route where we went down them and not up. At the bottom we strolled to an outdoor adventure area for kids that seemed more like an abandoned playhouse. We got there just as they prepared to have a water balloon fight. I wish I had a place like that as a child. You don’t see any of these spaces in America.

I was pleased with my decision to visit this more unknown city in Belgium. Good beers, waffles and fries everywhere, what a dream come true. With Amsterdam only two and a half hours away, I had to head there next. 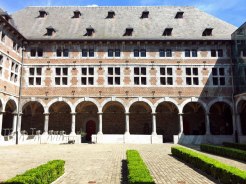 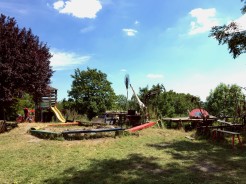 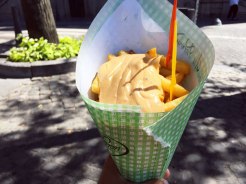